I was heading for Vietnam, a very warm place, but the Air Force insisted that I first attend survival school in Spokane, Washington in the middle of winter.

The first couple of days were mostly a review of things I learned in pilot training.


Yesterday we had parachute landing falls, dragging, chute malfunctions and steering.  In the water training today we were launched off a 20' tower down a cable, release the seat survival kit, check the chute, inflate the life vest, open the chute release covers, release the chute, climb into the raft, remove your harness, swim to another raft then under a parachute canopy to another raft.


I still use the parachute landing fall.  I haven't worn a chute for about 40 years, but I have fallen down.  And when you fall, the PLF is still the best way to hit the ground!


In outline what I'd done the past couple of days was...  crawl thru the mud of the obstacle course, get stripped & searched, placed in solitary confinement, alternately interrogated and placed in a little black box, moved to a compound, worked out in the rain, then was released.  Actually since yesterday was Friday the 13th it probably would have been shot to hell anyway.  It was a thoroughly miserable experience, but I was expecting worse.

The worst part of solitary was hearing the creaking doors of the solitary cells being unlocked and people being hauled out for interrogation.  Much later I learned those sounds were camlock-style truck trailer doors.  I still don't like that sound.  The solitary, interrogation, and box weren't bad because I knew it wasn't real.  Real POW's didn't have that luxury.


The class ahead of us returned from their trek today.  One guy died of exposure last night.  Bad stuff.

He got into his sleeping bag wet and never woke up.  The survival trek was all about escape and evasion.    The bad guys looking for us were on snowmobiles.  I still don't like that sound either.  The trek was cold, miserable, and snowy, but at least nobody died.

After survival school I met up with my buddy Eaton Merritt.  We drove about an hour to Mount Spokane, where we thought we'd to learn to ski.  We took the chair lift to the top of the mountain and fell all the way to the bottom. 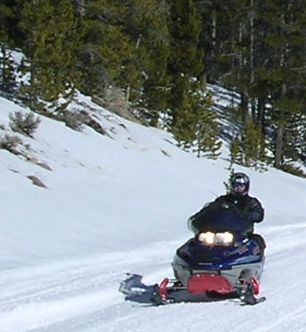