I sure do feel 98% better after a shower.  I've washed off the dirt of TSN, Danang, and Taipei.

We had to stop in Taipei so two 834th NCO's could clear customs (TPE is the only port of entry for Taiwan).  While we were on the ground there the CCK weather went to zero-zero.  So we waited an hour or so and it came up to 200' ceiling and 7/8 mile visibility so we leaped off.

As we reached overhead CCK we were advised that CCK was below minimums again.  So we held for about a half hour until the weather came up to 200' ceiling, 3/8 mile visibility, and runway visual range of 2800'.  Our minimum to begin an approach was 200' and RVR 2400 so we headed down.  Pea soup.  At 200' we spotted the strobe lights but I'd already started a go-around.


I probably could have landed OK, but I felt a go-around was safer.  So I climbed back up and shot another approach.  It worked out nicely with a grease-job landing even.  I'm glad I did it that way.

Back at the 776th were waiting letters of appreciation for being a mission-hacker my last two TSN shuttles--with endorsements from the wing director of ops and the squadron commander.  BFD really, but it is nice to be appreciated.

After dinner we played a game of Scrabble at Sach's.  Mike takes our Scrabble series very seriously in a good-natured way.  I hadn't won a game before, but I left him talking to himself tonight--everything just fell into place.

I successfully challenged Mike's word on the first turn of the game.  Then I got to make the first move and I used all my tiles.  I did that twice and got a triple-word score so I had over 200 points after the 4th play.  Suffice to say I won.


My leave was scheduled to start March 14th.  I could go as soon as I finished one more check flight.


I've finally got my leave card right in my hot little hand, signed sealed and delivered, along with an authorization for commercial air travel or standby.  I'm now scheduled for a check ride tomorrow if maintenance will release an airplane.  Hope hope.


I got some of the check ride done, but wasn't able to finish it.  The flight examiner said he didn't note any significant discrepancies in my performance.  That's one positive thing.


Talked with the scheduler this morn and learned that the examiner decided not to count any of yesterday's flight towards my check--he said we didn't get enough done to count.  Sigh.  However, I may get a proficiency check tomorrow (if they can wish up an airplane) and skip the TAC portion.  That'd suit me fine.  Sooo, there's still hope for my leaving here the 14th.

Even if this letter goes out today I may be there to read it to you when it arrives, so I'll make this missive my last.

These recent days have sure been grim--waiting on this doggone check ride while I watch our time together being eroded.

Yesterday I was told I'd get the check today, so I packed my bags, studied a little and thrashed the night away.  Got up early to get the briefing ready and learned once again that there were no airplanes available.  I was really sick.  And then I guess I really hit bottom this afternoon when I learned there won't be any airplanes available tomorrow either. A couple of people remarked that I looked kinda bad.  Small wonder.

I had checked with stan/eval about taking the check on an out-and-back and with the other squadrons about getting on one of their airplanes.  No luck.  So I tried to call you on MARS.  No luck.


I never understood why guys went AWOL.  Now I do. 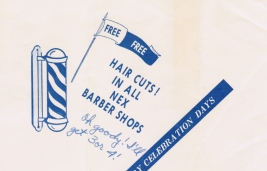