I had a little heart-to-heart with Major E, one of the schedulers.  "Training item accomplishments" have become quite a hot item lately.  The wing commander is leaning on the director of ops who is leaning on the squadron commanders who are leaning on their schedulers to get all crew members up to date.  In most cases this is being accomplished with a pencil rather than an airplane.  One of the requirements, doing drops and formation flying, I haven't done since I left Pope and they want me to certify that I've done a personnel  drop, heavy equipment drop, 2 CDS drops and a GCA/doppler drop since I've been here!  If they're going to carry me on their roster as TAC qualified they're going to have to give me a TAC trainer to do some drops.  I've about had it with pencil-whipping requirements.

Refusing to falsify this training certification may have been a career-limiting move, but what could they do?  Send me to Vietnam?


Today's mailbag brought a letter of appreciation from a Colonel Payne of Det One (Airlift Control Center at Tan Son Nhut) commending me and my crew for our "outstanding contribution to the airlift mission" and for completing 98% of our assigned sorties on my first shuttle as an AC. The original went to CCK's director of ops. Not bad. Also yesterday Major Steve Kovacs passed on a similar compliment that we were really getting the job done at TSN.  That was nice to hear.  We get a lot of admonitions like "Don't screw up"  but not much positive feedback.

I got a no-notice checkride coming in from CCK today and did pretty well on it.  Even made a couple of grease job landings.

What could they do?  Give me a no-notice checkride?  Interesting coincidence.

The flight record form was the source of some problems today.  The major whose crew deadheaded in with us wanted to log a little time on the forms, which is quasi-legal, so I agreed to put him on.  Then he wrote in everybody else on his crew!  Kinda ticked me off.  When I found out, I erased his name and everybody else's except his flight engineer, who took Sgt. Bruno's place on one leg and did a real good job.  Sheesh.

When I returned I worked on the information sheet for my Officer's Effectiveness Rating.  This morning Colonel R, my rating official, informed me it was due yesterday!  I was rather surprised when I added up all my flying time, missions, etc. and found I've flown 251 sorties in Vietnam since I've been here. 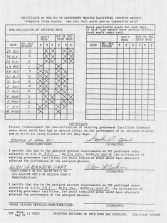