Yesterday was a full one.  We had an air evac mission around the country.  No wounded here--just broken legs, an eye examination, a pregnant woman, an alcoholic, two addicts and sundry others.

Drug testing had become a serious thing.  Before leaving Thailand even TDY types like us got "gold flow" tests (with two ID checks, a frisk, and a cop who accompanied you to the bathroom while you filled the bottle).  Our two "gold flow" patients were being sent to Cam Ranh Bay for observation.  I liked that choice of destination--if you can't play by the rules in Thailand, you get a turn in Vietnam.


We were zipping along ahead of schedule but that came to a halt at our fourth stop, Korat.  As we taxied out for takeoff, the tower advised that thre was smoke coming from our #1 engine!  So we shut it right down and taxied back in.  Turned out to be an internal oil leak, which called for an engine change.  Sigh.  In our six missions here we've brought back usable airplanes to U-Tapao just twice!

So our patients were offloaded and five hours later an airplane arrived to take them on to Bangkok and U-Tapao.  At about the same time a C-130B from Cam Ranh arrived for us and the two gold flows.

The B-model wasn't pressurized and our loadmaster Arne Suvatne apparently had a cold.  Descending into U-Tapao he got an ear block that was so painful the flight nurse had the AC climb back up to reduce the pressure.  Like the bends in reverse.  We eventually came down gradually but Arne's ear never did clear.  I know that must have been painful.  We whisked him off to the hospital where a doc worked on him for a while.


And that was my last mission in Thailand.  Note to self:  There was a reason they told us not to fly with a cold.

Late Thursday Terry and I headed for Pattaya Beach, about a 45-minute drive from U-Tapao.  Pattaya looked like a really nice beach resort.  We had a relaxing dinner then a couple of beers while we listened to bands at the Nipa Lodge and Pattaya Palace.  Then to bed blissfully unaware that at 9 ayem we would be jangled out of bed by a call from U-Tapao saying, "Surprise--you're going back to CCK at noon!"  So we packed up and checked out and caught a cab back to U-Tapao.  Never even set foot on the beach, but such are the vagaries of the AF.


Communication with loved ones back home was more difficult back then.  At CCK you had to go to the central telephone office in Taichung to make an international call.  MARS (Military-Affiliated Radio System) filled the gap.  A radio operator at the base would make contact with an amateur radio operator back in the US, who would "patch through" a phone call to the destination.  There were long lines at the MARS station and connections were poor, but it was better than nothing.


I'm back at CCK now (at the MARS station).  Funny--upon hearing that my next assignment is Pope, a guy here in the MARS station offered to give me the address of a good-looking blonde in Fayetteville.  I told him thanks, but that I'd be bringing my own. 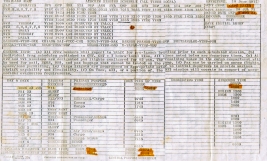 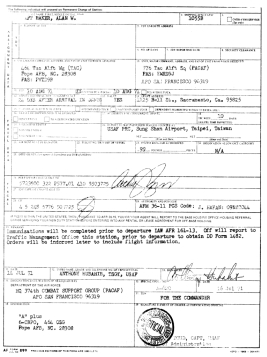