Now that I knew how to fly the C-130, it was time to learn how to land it in the dirt.  So I got into my old Porsche and headed for Pope AFB, where they teach such things.  I was born in North Carolina and I keep returning there.

My route of travel takes me within 10 miles of Strawberry Plains, Tenn, Ron Knight's home.  I'd stop to see his mother there but I can't recall her name (she's remarried).  I met her only once, at Moody when we graduated from pilot training.


Ron Knight was a good friend in pilot training.  He died October 8, 1969 in Vietnam when the EC-47 he was flying caught fire and crashed.  I've always regretted not looking up his mom.

I took the long way to North Carolina so I could visit Mike and Carol Self in Fairborn, Ohio.  I've known Mike since 1956 and Carol since 1963.  While we were roommates at Duke, Mike purchased a 1960 Renault 4CV (which he still has).  Thus began his career as a died-in-the-wool car nut.

After breakfast we drove down to Dayton Cracked Block (honest, it's a real company) to see about getting a cylinder head for the Renault repaired.  As it turns out, it'd be cheaper to replace than repair, so no soap there.  On the way back we stopped at the Porsche dealer and picked up a needed oil cap for me.

When we got home Mike started calling junk yards to find a head and then we were off to a couple of them to locate same.  No soap. Just lots of wandering through the yard looking at dead cars (which Mike dearly loves to do).

On the way home we stopped at the body shop that's working on Mike's 1948 Fiat.  Looks like they've finished the bodywork, so now Mike & I will tow it home Monday so he can start sanding in preparation for painting.  It's really a cute little car.  So now Mike is painting a door sill on his Renault.


Mike was an intel officer at Wright-Patterson AFB.  He got orders to Vietnam while I was at CCK.  He decided to buy Carol a .38 revolver.  He wrote further...
I am also going to get me an ambulance siren... and hook  it up to a switch by the bed.  Then if Carol hears a noise in the night she can trigger the siren which will trigger the dog and cause almost any would-be intruder to run up his laundry bill.

I drove about 5 hours with the top down (it was a beautiful day once I got out of Ohio) and have got myself a noticeable sun/wind burn.

I gave a marine from Camp LeJeune a ride.  He was overdue on returning from a pass from LeJeune.  He'd gone home to Memphis--500 miles is a bit far to hitchhike on a pass.  When I asked him how long he had left in the  Marines he said he was about to receive a UD--undesirable discharge.

Here I am at Pope Airplane Field Base.  I think.  There's not even a gate.  I just wandered in and ran into the base ops cafeteria, so I decided the first order of business was supper.


I flew enough hours as a C-141 copilot that I was able to go directly into C-130's as aircraft commander.  The flip side is that I was the most junior AC in my C-130 class, so I got the worst schedules.


The Monday flying schedule is up and since RHIP (rank has its privileges) guess who got the earliest flight.  Yup.  Good old yours truly.  I'm the only lieutenant pilot.

Tomorrow I'm going to drive up to Harrellsville to see my relatives.

I'm at my Aunt Callie's house in Harrellsville in one of the 5 bedrooms (this one was once the parlor) of their old farm house.  Saw my cousin Nell & her husband Harvey for the first time in ages--they have a couple of really neat kids.

After supper I drove over to my cousin Richard Jr's.  He and Jackie have 2 boys and it was Mike's birthday so a couple of his little friends were over for his birthday party.  They wanted to ride in my car (boy did they ever) so I took the flock for a ride and they seemed to get a big charge out of it.

I had lunch with my Aunt Susie & Uncle Richard.  Nell and Harvey were there with their kids (Leah is a most precocious 5-year-old--she thinks like a 10-year-old).  Richard Jr. and Mike joined later.  After a couple of hours I returned to Aunt Callie's (Mike & Leah wanted to ride in my car so I drove them to Richard & Jackie's). 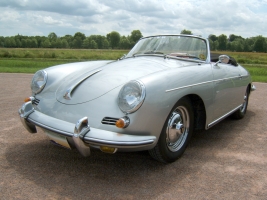 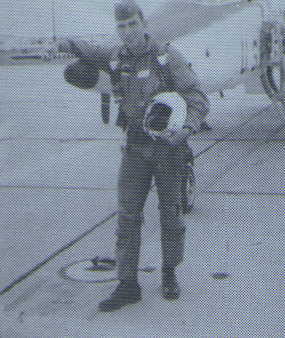 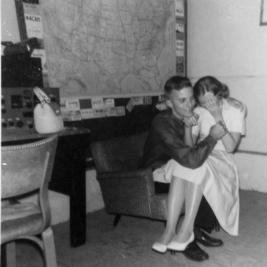