We rarely have our courage tested.  In 1971 these men did.

During Lam Son 719, eleven C-130B's were temporarily stationed at Danang.  Their mission was to fly loads into Khe Sanh.  Danang was nicknamed Rocket City because it was subject to such frequent rocket attacks.  An attack on February 24, 1971 destroyed a C-130 and damaged others nearby.    The only salvageable part of 642 was its tail, which was reused on an AC-130.

The quick action of the men of the 15th Aerial Port Squadron kept this attack from becoming a disaster.  Luckily, 642 was the only bird on the ramp that was not loaded with class A explosives bound for Khe Sanh next morning and it had no flight or ground personnel inside.  James Theis (Captain, USAF, Retired) recalled that night...

In 1971 I was a young enlisted air freighter at the 15th Aerial Port working 7 nights a week.  I was one of a few guys on break in the line shack  about 150 ft from that unfortunate bird.  We heard the rocket's whish a split second before it hit the plane on the top part of the left wing.  Needless to say we hit the floor first then hit the road briefly before running back at full tilt.

Despite the inferno, I personally can attest to the sheer and unrecognized bravery of many Air Freighters that night.  One guy grabbed the fuel line next to the plane to make sure the fire didn't spread to the fuel system, one moved the fuel pumper away, one grabbed the large extinguisher and started trying to control the fire, and one went around back to check for personnel.  Others grabbed forklifts and yanked the ammo from the adjacent planes as we did not know if the burning plane was loaded or not and, as far as we knew, it could blow at any moment.

I can tell you the fire was awfully hot but it didn't blow up as can be seen in the pictures.  None of us were trained to do any of those things yet it all seemed a perfectly choreographed play, well rehearsed and acted.

Yes, it was a tough night.  The rocket on the C-130 was only one of several that landed near the 15th APS that nght.  We were lucky that no one was injured and that the damage wasn't worse.   Most men cannot remember or they do not have an event that changes them from being a boy to a man.  I do. 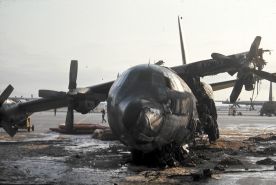 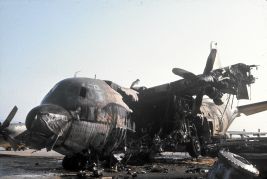 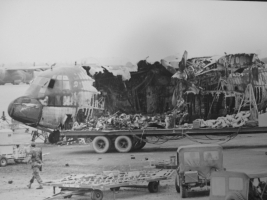 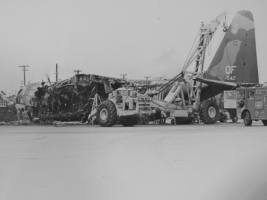