Our first stop of the day was Kontum, a little airfield up in the highlands near Fire Base 6.  One month earlier, the NVA overran and occupied Fire Base 6. Lt. Brian Thacker was awarded the Congressional Medal of Honor for his heroism in that battle.

We hauled 100 Vietnamese troops up there.  Made a pretty good max effort landing.  On to Pleiku, about 20 miles south.  Next stop was spozed to be Song Mao (near Phan Rang), but Hilda sent us to Danang because of weather at Song Mao.  Had a rail lock problem at Danang but chained down our cargo and here we are at TSN getting the lock fixed.  The thunderstorms are getting pretty thick.  Not too pleasant flying through them at night.

Pilots and navs earned their pay during night thunderstorms.  Caribous, C-123's and the VNAF generally flew in day VFR conditions.   We flew day and night in any weather.  If the destination field's weather went below minimums to land, we were diverted to the next best place.

Just returned from another day at the Southeast Asian War Games.  I love you.  We visited Kontum again today--my landing was not as pure as yesterday's.  On the way to Pleiku, B.V. (the copilot) got suddenly hit with a case of Ho Chi Minh's revenge and by the time we reached Pleiku he was almost immobilized.  As luck would have it we had to make a go-around for an aircraft on the runway and during those few extra minutes he was afraid he might not die!  But everything came out all right (ich) and he was OK for the rest of the day.

On that same leg to Pleiku we carried a Vietnamese sergeant, his wife, and 2 kids.  They scrunched up into a little corner of the airplane like frightened rabbits so I brought them some Cokes and let the little boy ride up front.  He was glued to the window the whole trip.  We often neglect common courtesies when dealing with the Vietnamese.  It's nigh impossible to make people comfortable when there are 130 combat-loaded onto the airplane, but we should remember that they're people too. 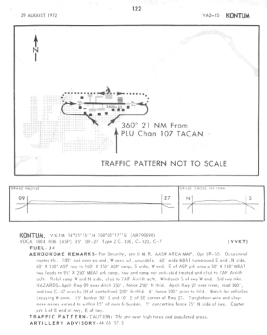 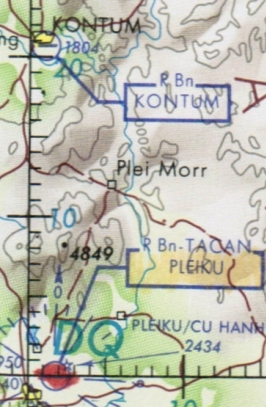